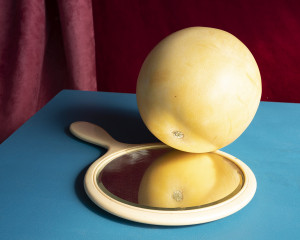 Fritz: Fragments from an Imagined Presidential Museum for Walter F. Mondale explores an imagined presidential museum for former Vice President, Senator, and Presidential Candidate, Walter F. Mondale. Constructed in the studio, historical images and objects are reconfigured to imagine a lexicon of visual representations that Mondale would have contributed to the history of the US presidency, and presidential masculinities. Mondale played pivotal roles in transforming the Vice Presidency, advocating for a nuclear freeze, fighting for the Equal Rights Amendment, and expressing leadership through supportive and secondary roles, both at home and in the national spotlight.